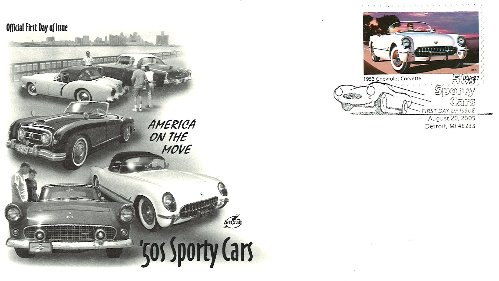 After 20 years of depression and war, things started to change to "normal" in America (but not just there). Hundredthousands of GI´s returned home from Europe and Asia, formed families and created a 75 million strong baby boomer generation and they would fuel a new consumer economy.

This, but not just this, was one of the arguments to justify the Corvette project.

Harley J. Earl, GM´s head of the Art and Color department, had a sense for customer needs and the upcoming changes. The market wanted more than just a conservative sedan. Cars started to become a personal statement.

Earl started to think about a GM sports car in 1951, when driving in his personal masterpiece, the LeSabre concept car. But he may has been influenced by his sports car fanatic sons and his friend and Cadillac engineer, Ed Cole.

When a small group around Earl started to work on the design of the Corvette, they got inspired by a number of cars from Italy and Germany. The rounded frontal design that was being explored by Earl´s team goes back to a German vehicle from 1922, called the "Ley". This desing back them came from Paul Jarey, who already in the 1920´s tried to incorporate similar shapes on an etire succession of cars. Also the 1951 Cisitalia Nuvolari blended the headlights into the front. The sculptured single taillights have been influendes by the 1949 Ferrai Le Mans. Anyway, what the GM team finally designed simply was a sensation.

While the design of the Corvette was under way, it was still not clear which GM division should sell this new sportscar. In an executive presentation on June 2nd 1952, Ed Cole grabbed the chance and secured the new sportscar for Chevrolet. He wanted to have a car in the portfolio, that could do two things. First, to scrap out Chevrolet´s image as a conservative car company. Second, in the Corvette he saw the perfect showcase for a new V8 engine that should be ready soon.

The new sportscar should be presented on the Motorama show in New York´s Waldorf Asoria Hotel on January 17th, 1953. It was clear, that the car on the show would be one out of the four fiberglass prototypes.

But the problem was, that the car still didn´t have a name. Chevrolet´s ad agency created a list with about 300 names - non of them made it. One day, Myron Scott, a GM photographer read an article about a new fast pursuit ship of the Navy, called the Corvette. He finally wrote a not to Ed Cole saying "How would you like to take a ride in my Corvette? As you know, the Corvette is the new sportscar built by Chevrolet". Half an hour after Cole got the note, he called Scott and invited him for a ride in his new car, the Corvette....

Only two days after the car was introduced to the public, GM president Harlow Curtice announced that the car was going into production. From June on, 300 units should be built in 1953.

The 1953 and 1954 model years had a bit of a bumpy start. People liked the new and fresh design, but there was also some criticism about the power and driveability. Some had higher expectations on the performance of a sportscar, it seemed the the Blue Flame 6 Cylinder engine was not powerful enough. Chevrolet reacted in 1955 (probably not only because of the new engine in the pipeline, also because of Ford´s Thundebird sitting in their neck) and intorduced the new, more powerful engine. Since that day, the Corvette is considered as the only "real" American sportscar.