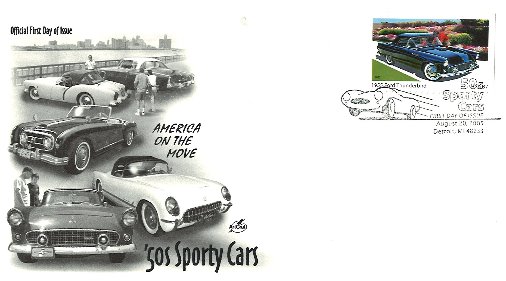 As usual, also the story about the Tunderbird´s history varies a bit. The interesting part is, that the Corvette and the Thunderbird have not only been the last survivors of the early American Sportscars. In the beginning, they influenced each other behind the scenes. How did this happen?

A team of Ford executives was walking the 1952 Paris Automobile Salon. Inspired by all the sportscars on display, Jaguar XK 120, Triumph etc.., the question "why can´t we have something like that" came up.

George Walker, Ford´s chief stylist, directly contacted his staff back home to kick off the sports car project. What all the other executives did not kow: a very small team has been working on such a project in their spare time already.

Once the Paris team returned to Dearborn, a scale model and other proposals have been ready!

But how get the Thunderbird and the Corvette connected? Well, Frank Hershey, ex GM designer, held the position of the Ford´s design director at that time. By his old GM connections, he knew about GM´s two seater sports car project.

Once the Corvette was introducced to the public in 1953, the Ford team immediately tried to analyze the strength and weaknesses of this new car. The introduction of the Corvette was a great success, but the early models with their 6-cylinder engines have been considered as being underpowered.

So Ford consequently promoted the Thunderbird with a 4.8 ltr V8, steel body and many comfort features like roll up windows etc., that the Corvette did not have. For this reason, the Thunderbird in general is not considered as a sports car. Ford created the term "personal luxury car" for the T-Bird.

On the other side, Ford´s efforts on the Thunderbird had an effect on the Corvette as well. In 1953 GM sold only about 300 Corvettes and in 1954, after the move to the new St. Louis assembly plant, 3000 Corvettes have been built. But only 2000 out of those have been sold by year end. With an eye on the Thunderbird, GM then decided to offer the Corvette with a more powerful 8 Cylinder engine from mid 1955 as well. A smart decision, the Corvette is the only true American sportscar until today....