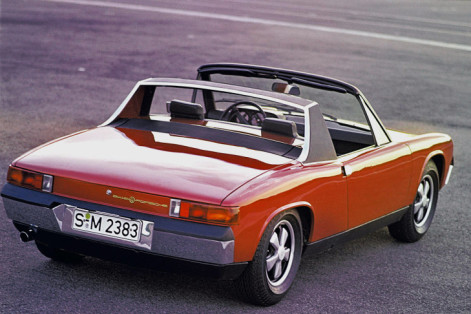 Even with the 914 we have a history that varies a bit. Porsche was thinking about a mid engined sportscar in the mid-sixties already. The original idea to use the 904 as a blueprint for a street legal mid engined sportscar could not be realized. A design company from a town southeast of Stuttgart (Neu-Ulm) has presented an idea to the Porsche engineers. Gugelot Design GmbH, the name of this design company, developed a front engined car with a foam/fiberglass body. Porsche bought this design in 1966 and reconfigured the design to what we see today. BUT: other sources also say that the 914 is a 100% pure Porsche breed...

Anyway, after the body of the 914 was designed and approved, tests could start. The 914 body was surprisingly stiff and passed all crashtests without issues.

The idea around the 914 was, to build two versions. A less expensive version, the 914-4, assembled at the Karman plant in Osnabruck and equipped with a Volkswagen 4 cylinder engine, that would be sold through the Volkswagen sales organization. Second, the high end version, the 914-6. That car would be assembled on the 911 lines in Zuffenhausen having the engine and other components from the 911T.

The 914-4 could be presented as the successor of the Karman Giha, the 914-6 could be the entry level Porsche after the 912 would be discontinued. So far, so good.

Ferry Porsche and Heinz Nordhoff, the Volkswagen CEO, had a very good relationship. They often did not need a contract, a handshake was good enough. A handshake agreement has been the base for the 914 concept as shown above. In July 1967 Mr. Nordhoff got sick and passed away in April 1968. So there was no chance to involve Nordhoffs successor, Kurt Lotz, in those gentlemen agreements. According Lotz opinion, Volkswagen, owning the stamping tools for the bodies, had exclusive rights on them. If Porsche wanted to buy the bodies, they would have to contribute to the tooling cost. But this tooling cost contribution would ruin Porsche´s calculation of the car.

At the end, Volkswagen and Porsche startet a joint venture, the VW-Porsche Vertriebsgesellschaft GmbH (VW-Porsche Sales Ltd). A company that was focusing on sales of the 914 only. In Europe, the car was sold as "VW-Porsche" and in the overseas markets, the car was brought to market as a Porsche.

But in the end, with the higher cost for the bodies in the background, the calculation for the 914-6 didn´t really fit anymore.

There are not too many cars in original condition out there today. Many 914-6 got converted to race cars, have been equipped with all kind of other Porsche engines, got wide 914-6 GT style aftermarket fenders and so on. On the other side, there is quite a number of 914-4 that have been converted to a 914-6. This might be the reason why some people say: out of the 3.500 914-6 that have been built, all 5.000 have survived! :-)