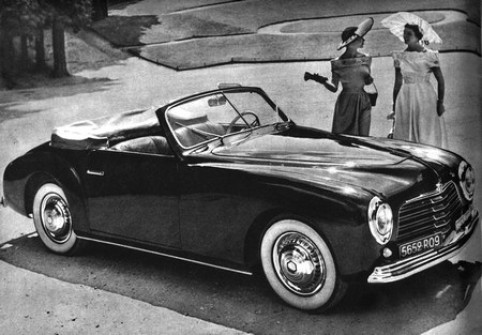 In 1937 SIMCA introduced the Simca 8, a robust family car. After WW II production started again slowly and Theodore Pigozzi, back then Simca CEO, was thinking about a sports car version of the Simca 8.

During a visit to the Fiat factory in Italy he saw a prototype designed by Stabilimenti Farina, based on the cassis of the Fiat 1100-S. Pigozzi did not wase any time. He just ordered a second car, put Simca bagdes on it and presented it as the new Simca Sports car at the Paris exhibition 1948. What a success!

A contract with Farina was signed and another contract was discussed with Jean Daninos, founder of FACEL Metallon. Reason: Facel should build the bodies of the car for Simca.

Interesting enough to say that Farina obviously must have sold the design three times. Actually the Ferrari 166 and the Cisitalia have been introduced with very similar body designs, but of course different mechanics under the hood.

Then, 1949, everything has been sorted out and the first "real" Simca 8 Sport Prototype has been presented on the 1949 Paris motorshow. It was said, that the Simca 8 Sport has been the most beautiful French car of it´s days. Right from the beginning the car was available as a Coupé and a Cabriolet. The only weak point was the performance. Using the chassis of the Simca 8 and a slightly upgraded engine with now a bit more than 1200 ccm and 50 HP, customers could not expect the same performance as shown with the Ferrari´s and Cisitalia´s. But, the Simca´s maximum speed of 135km/hr must have been kind of impressive during the early 1950s. The price for the Simca 8 Sport was roughly double than the price for the standard Simca 8. Probably another reason for the low quantities sold.