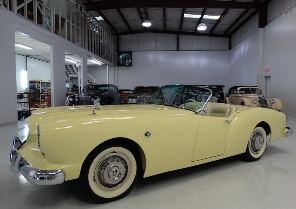 Finding a Kaiser Darrin is not easy. Usually, they are sold at an auction. When I spotted this car in 2014, it was to be sold on an auction in Auburn/US. I unfortunately could not get registered fast enough as a bidder, so the auction was over and somebody else bought the car... 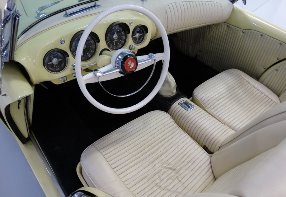 ...I actually found out who bought the car - a well known classic car dealer from St. Louis. Because of the interesting history of the car, I really wanted it. After the inspection, (first time I inspected a car prior to purchase!) it was clear that I could not let this one go... 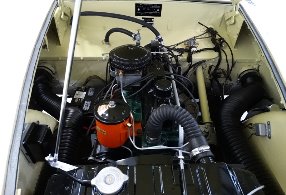 ...so I had to buy it and became owner of # 137 out of 435 cars that have been built only. I am the 4th owner, the entire history of the car is known, approx. 35.000 original miles (that seem to be reasonable) and beside a terrible repaint, the car seems to be in original condition. 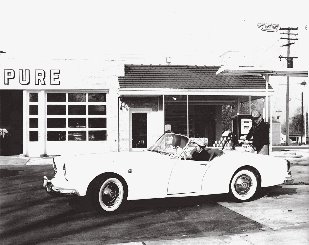 Back in 1954, the PURE oil company organized a raffle for their Toledo/Ohio gas stations. During the month of September, this raffle was heavily advertised in the "Toledo Blade", the local newspaper. Beside many other prizes, the second prize was a 17" (!) TV set, the grand prize was a Kaiser Darrin sports car. Anyone purchasing a full tank of gas would receive a free raffle ticket, or tickets could be bought as well. The car that is introduced here, is exactly the car that has been the grand prize from this raffle.

The documents that I got with the car are telling this story: A lady from Toledo won the car. Unfortunately, she and her husband ended up in a divorce and the Court ordered the car to be sold. A gentlemen, also from Toledo, bought the car and kept it until 1956, when he sold it again. The third owner bought the car in 1956 and confirmed in writing "the car has never been in the rain since I have owned it, with the exception of about a month in 1962 (his other car was involved in an accident). Since that time, the car has been in storage for the most part.

Due to the history of the car, being the grand price in the Pure Oil raffle 1954, I thought it would be nice to have this kind of "Pure Oil Gas Staion" setup in the garage. Well let´s see....